Ultra powerful WiFi 6 :- RT-AX82U brings you all the benefits of WiFi 6 (802.11ax), and works perfectly with all your existing WiFi devices!

Boost Your Mobile Gaming :-Minimize lag and latency for mobile gaming with just a tap on the ASUS Router app.

Prioritize via Gaming Port :-  The dedicated gaming port on RT-AX82U automatically prioritizes any wired device connected to it. No complex configuration is needed, just connect your gaming PC or console to the special LAN port to give you a fast, stable connection that’s always at the head of the queue.

Commercial-grade Security for Your Home :- Home network security is crucial when you have multiple connected devices, and even more so when there are devices without anti-virus capabilities such as IoT devices. RTAX82U includes lifetime free AiProtection Pro, including the latest WPA3 security protocol and advanced Parental Controls. Every device is protected with RT-AX82U, and you can keep an eye on everything that’s happening on your network via the handy mobile app.

Whole-Home Gaming :- Does your router leave you with WiFi dead spots? RT-AX82U supports ASUS AiMesh, a unique mesh networking technology that creates a whole-home network using multiple ASUS routers. With easy central control and seamless roaming, even non-experts can set it up with any AiMesh-capable routers you own. Say goodbye to WiFi dead zones! 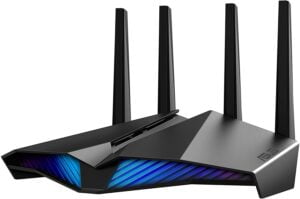