Get the Asus RT-AC750L Wi-Fi Router from Kharidiye.com at the best price. Best Features Includes:

Robust control and optimization with ASUSWRT

With the ASUSWRT in the Asus RT-AC750L Wi-Fi Router dashboard UI, setup, monitor, and control network applications all in one intuitive area.

On top of 30-second setup, multi-device detection, and flexible settings that make the most of your network performance.

Dual WAN in the Asus RT-AC750L Wi-Fi Router enables having two connections/ISPs on one router, with load balance and failover mode for added stability and redundancy to ensure uninterrupted internet access.

Do you game a lot, or spend most of your time streaming videos?

Whatever your planned use is, the RT-Asus RT-AC750L Wi-Fi Router has Quality of Service (QoS) standards that let you select how much bandwidth is prioritized for virtually any task.

Plus, the traffic monitor in the Asus RT-AC750L Wi-Fi Router allows you to check your Web usage in a clear graphical interface

Control your network anywhere :- In your increasingly mobile-enabled life, having control over your network via an app is more important than ever.

The new ASUS Router App in the Asus RT-AC750L Wi-Fi Router is built from the ground-up to be both intuitive and robust.

Allowing you to setup your router, manage network traffic, diagnose connection issues and even update firmware, all without needing to boot up a PC

The upgraded bandwidth has the higher capacity you need to increase Wi-Fi enjoyment at home.

With notebooks, desktops, pads, and smartphones now all Wi-Fi-reliant, it’s time to upgrade to the next generation to expand you connectivity now and in the future.

Dual-Band Connectivity for Lag-Free Entertainment :- Delivering both 2.4 GHz and 5 GHz concurrent bands up to 300Mbps and 443Mbps respectively.

The Asus RT-AC750L Wi-Fi Router has a total speed of up to 733Mbps connectivity to provide speed with stability.

Perform basic internet tasks like Web browsing and file downloading under the 2.4 GHz band, while also simultaneously streaming 3D HD content and other demanding applications smoothly on the 5 GHz band. 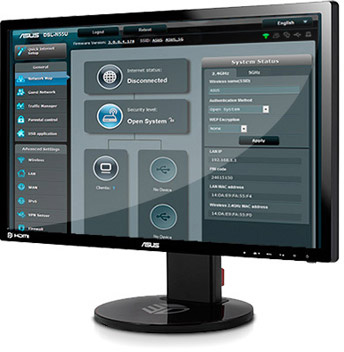