The Hikvision manufactures SSDs especially for desktops to make your files open quickly. With the Hikvision E100N 256GB SSD, that has the ability to work in both Laptops and Desktop devices, opens your files at a quicker rate, making you not to wait for a long period of time. Thus making you complete your work on time.

However, the Hikvision E100N 256GB SSD is suitable especially for Desktop devices as it has the best speed for opening files at 530 Megabits per second. This speed is incredible for you to read out the files you need to check in a short sample of time.

SSDs, known as Solid State Drives has been in major demand for another storage solution option to users other than Hard Disks. With the increase in demand, it indicates that SSD technology is superior than Hard Disk Drives or commonly known as HDD 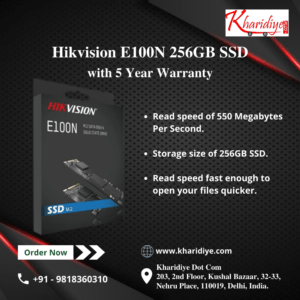 Get to know why the Hikvision E100N 256GB SSD is the one best for you.

Reliability: The Hikvision E100N 256GB SSD has been made of standard grade of quality. As SSD’s has no moving parts. The SSD uses flash memory to store data, which provides better performance and reliability over an HDD.

Why should you buy the Hikvision E100N 256GB SSD from Kharidiye.com?

The Hikvision E100N 512GB SSD is built with a more memory capacity. This storage would be best for people who are in to extensive video editing and high website editing work.

It’s stability is high, due to the 3D NAND that offers the potential for higher capacity, performance, and stability.

With this, if you are looking for a more affordable version of Hikvision SSD, we have the best for you.

The Hikvision E100N 128GB SSD that offers speeds of up to 520 Megabits per second. This speed is generally the best for any files to open at a quicker rate.

It is compatible with almost all kinds of software, be it from Microsoft office to any google related software. You can expect unavoidable loss of data.